The COVID-19 situation in Indonesia is still under control and no areas are imposing Community Activities Restrictions Enforcement (PPKM) Level 3 and Level 4 (Level 4 is the highest level of severity).

Schools are open for face-to-face learning, except for the areas that impose PPKM Level 4 (if any) with less than 80% of the teachers and staff vaccinated, and less than 60% of the elderly in the community vaccinated.

Investment in the manufacturing sector has increased to Rp230.8 trillion (US$15.4 billion) in the first half of 2022 from Rp167.1 trillion (US$11.2 billion) in the corresponding period of 2021. The Indonesian Government is confident with the improved domestic demand alongside the community activities dynamics that have grown flexible, as well as the expedition of booster vaccines, which guarantees the interest of investors to expand in the country.

Earlier this year, the Indonesian Businessmen Association (APINDO) filed a lawsuit with the State Administrative Court (PTUN) against the Jakarta Governor's decision to raise the 2022 provincial minimum wage by 5.1%. The lawsuit is granted and PTUN asked the Jakarta Governor to reduce the increase in wages. Labour unions have made a request to the Jakarta provincial government to appeal against PTUN’s verdict.

Schools are running normally again in Indonesia. However, the pandemic has had a significant impact on the number of children dropping out of school. According to UNICEF, the dropout number in Indonesia has increased to 4.3 million children due to pandemic.

In response to learning losses due to the pandemic, the Indonesian government has rolled out a new curriculum called “Merdeka Curriculum”. It will be applicable from this year for early childhood education institutions all the way up to senior high schools.

Indonesia's Manufacturing Purchasing Managers’ Index (PMI) dropped by 1.1 points to 50.8 in May 2022 because of supply constraints (e.g., lengthening of suppliers’ delivery times, persistent and rapid increases in prices). The good news is that demand continues to rise.

According to Badan Pusat Statistik (BPS), the proportion of workers/employees with monthly take-home-pay below minimum wage reached 50.61% in February 2022.

Starting in the second week of April 2022, around 10.979 schools in DKI Jakarta Province carry out face-to-face learning at 100% of the capacity. The Health Department is closely coordinating with schools and health facilities to prevent COVID-19 transmission at schools. Other than DKI Jakarta, there are four provinces and 306 regencies/cities that are carrying out face-to-face learning at 100% capacity.

Indonesia’s 2021 national assessment of education's quality shows that: i) one out of two students had not reached the minimum literacy competence; ii) two out of three students had not reached the minimum numeration competence. This assessment covered more than 259,000 schools ranging from elementary level to high school level, with more than 3.1 million teachers and 6.5 million students.

The Indonesian government has finally begun to allow inter-city movement for homecoming trips during the Eid celebration in 2022. Previously, the government decided to abolish the long holiday for Eid celebration in 2020 and 2021 due to the pandemic. Homecoming is a Muslim tradition in Indonesia on every major religious day, especially during the Eid celebration. During this long holiday, the majority of people will go back to their hometown to reconnect with family and friends.

As of 26 April 2022, the Indonesian Ministry of Labour received 1,828 grievances from workers regarding yearly religious holiday allowance (THR). According to regulations, workers are supposed to receive 100% of their THR one week before Eid celebration (on 25 April 2022 at the latest).

In the areas that impose activity restrictions (PPKM Level 1, 2, 3), schools and education units are carrying out limited face-to-face learning (50% of the capacity). Level 1 and Level 2 areas can carry out full face-to-face learning when the COVID-19 transmission is under control and the schools/education units are well prepared (e.g. 80% of the teachers and staff are vaccinated with the second dose).

Litbang Kompas conducted a survey on 10-13 February 2022, and the result showed that 70% of school dropout cases in Java were due to parents not working or children having to help their parents work during the pandemic.

Perhimpunan Pendidikan dan Guru (Education and Teacher Association) said that elementary school children in the lower grades were the most affected by learning loss due to the COVID-19 pandemic. Students are falling behind in basic literacy skills and mathematic skills. Teachers also face challenges in maintaining emotional connection with the students. Another report also mentioned that the online learning system in Indonesia is not friendly to students with disability, so they lost access to good education.

Indonesia's manufacturing Purchasing Managers' Index (PMI) has been above 50 for six months in a row. This means that manufacturing production is growing. However, the growth rate is slowing down due to the increasing cases of Omicron. The increase in demand and production throughout February 2022 was lower than January 2022.

The Indonesian government has loosened the activity restrictions (PPKM regulation) in Java and Bali for the period of 22 March – 4 April 2022 as the COVID-19 situation improved.

For the past two years, THR (yearly religious holiday allowance/bonus) payments were not paid normally. The Confederation of All Indonesian Workers' Unions (KSPSI) demands employers to pay THR in full as the Indonesian economy is recovering this year.

Media also reported workers in Sukabumi and Aceh held protests against their company because they were being terminated without severance payment.

On the other hand, hundreds of workers from the Confederation of All Indonesian Workers' Unions (KSPSI) held a demonstration in Jakarta and demanded the government to revoke Omnibus Law and to stabilise food prices (especially the rising price of cooking oil).

Impact on workers and children

Indonesian Education Ministry data revealed that students in 12,000 schools in far-flung, outermost and underdeveloped regions have no access to the internet, while students in 48,000 schools face poor internet connections.

The ministry has allocated Rp 7.2 trillion (US$490 million) to provide internet quota to students and teachers in all education levels.

The situation of workers:

The situation at factories:

The situation of parent workers:

One female factory worker whom we interviewed said the biggest challenges for her family during this COVID-19 are paying their house mortgage and caring for their child. When the factory operated reduced hours from April-July 2020, she had to borrow money from her relative to pay their house mortgage because her income (including her husband's) could not cover that expense. She also had to change her son's formula milk to a cheaper product, avoid buying new toys or clothes for her child, and never went out during day-off/weekends.

The situation of workers and factories:

One rattan farmer we interviewed said that during this pandemic, her 16 year-old daughter has been studying from home, so she usually looks after her 10 year-old brother at home. She also helps with cleaning the house and cooking, so when her parents got off from work, their home is clean and they have food on the table. Before the pandemic, she would go to school every day and come home at 3 pm, while the 10 year-old brother would come home from school at 12 pm and would be at home by himself until his sister came home.

The Centre provided in-kind education support to 147 children of rattan farmers in Central Kalimantan and factory workers in West Java. The support for children of rattan farmers was distributed on 18 Aug 2020, while the support for children of factory workers was distributed on 21 Aug 2020.These children received an education package that consisted of a school uniform, bag, 1 month internet data, books and stationary. 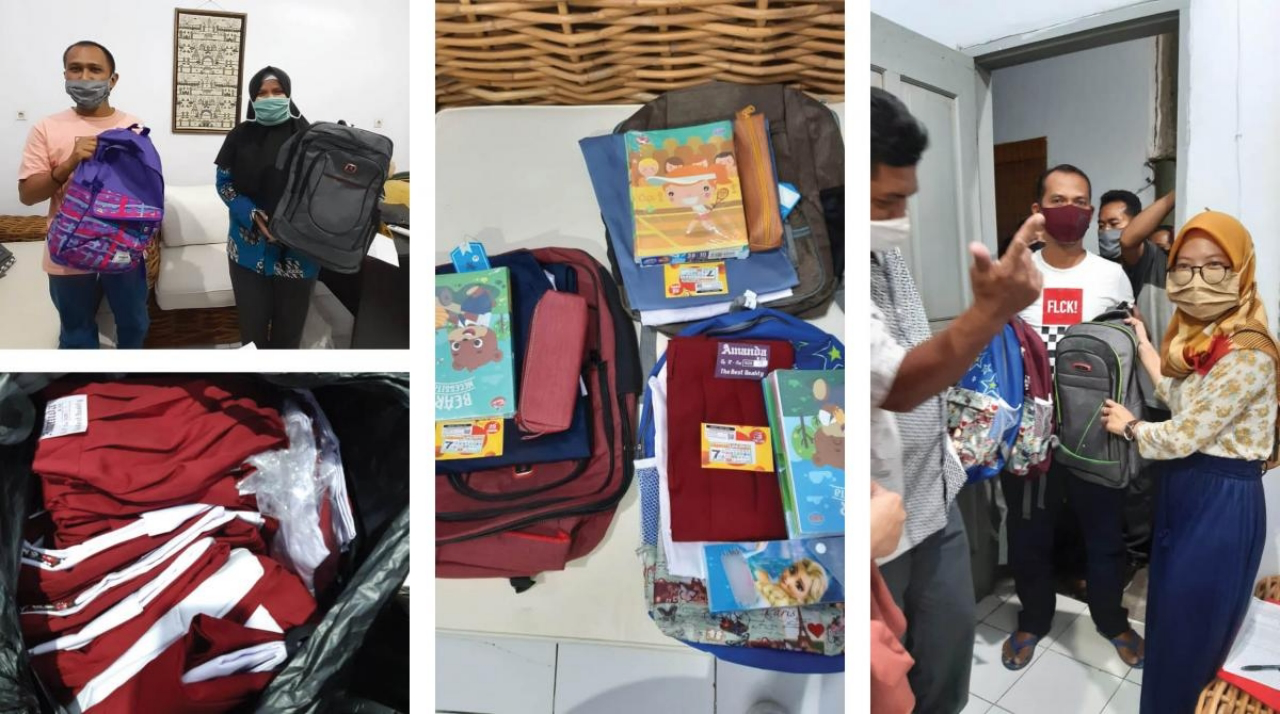 Factory workers in Indonesia are given education packages to support their children to go to school. August 21, 2020. 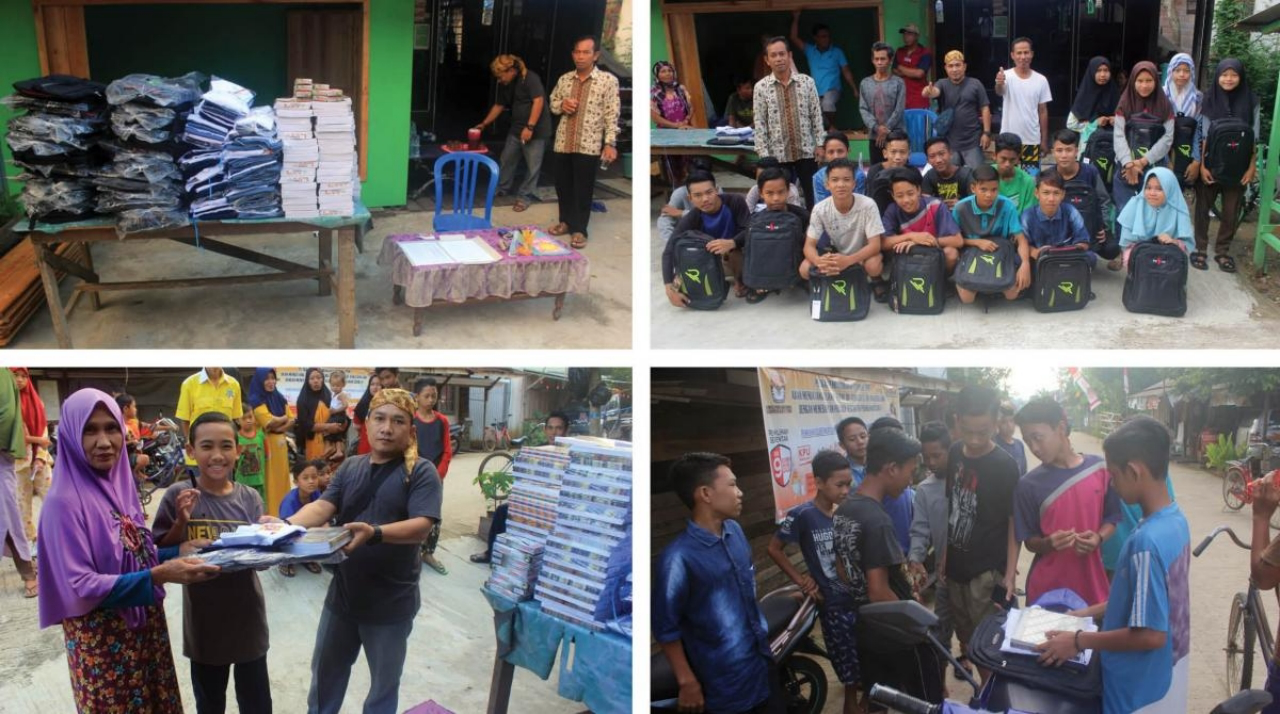 Rattan farmers in Indonesia and their families receive education packages on August 18, 2020 to encourage and support them in their schooling while also alleviating parents' financial pressure to an extent.

The Centre is currently planning to provide in-kind support that can be given to rattan farmers and workers impacted by COVID-19, in particular support towards their children's education as a new academic year is starting this month.

We interviewed 3 parent workers from different departments in a factory in Central Java, Indonesia, (i.e. operators of cutting, sewing, and packing departments). They shared the following concerns and challenges with us:

The situation of young workers:

We interviewed three young workers in a factory in Central Java Indonesia recently to learn about their situation during the pandemic.

All 3 young workers learned new skills as their factory has begun producing face masks and hazmat suits. They are all still working in the same production department but the type of work has changed. For instance, one young worker in the cutting dept. who usually worked on collar interlining is now working on mask cloth numbering, while another young worker who usually worked as a trimmer in the sewing dept. is now working on inserting rubber straps onto face masks. Their supervisors have that they are adapting to the new tasks quite well.