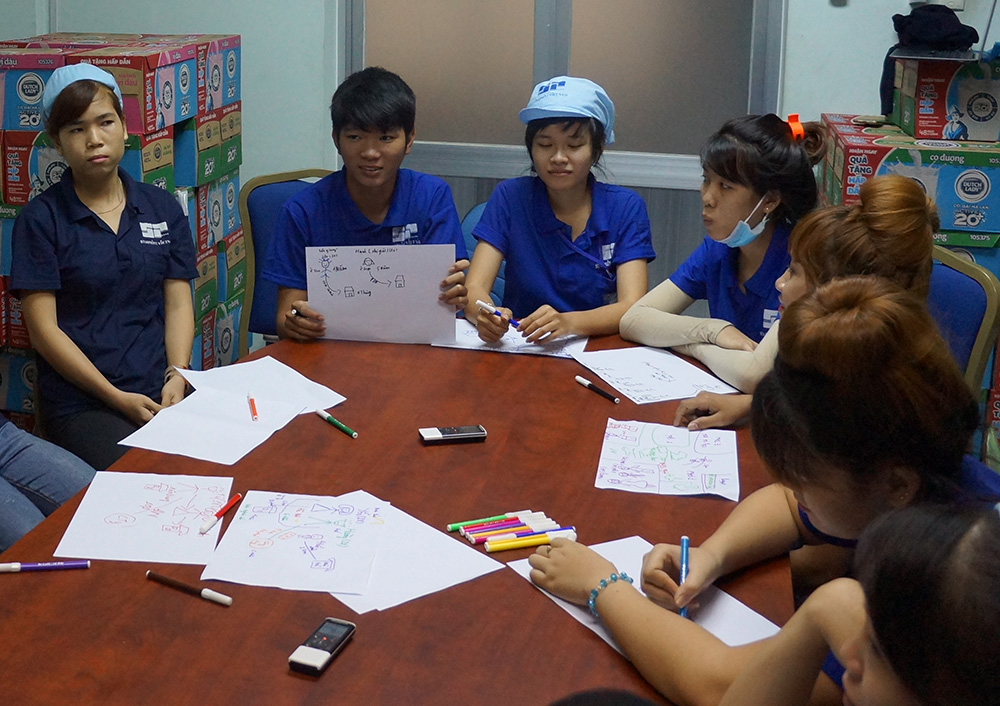 In late 2016, The Centre for Child Rights and Business teamed up with the Save the Children Vietnam and their partner ISMS to carry out a rapid assessment in four factories in Hanoi and Ho Chi Minh. This rapid assessment laid the foundation for a Children’s Rights and Business project, which aimed to develop a long-term strategy to strengthen the capacity of local civil service organisations on children’s rights protection and incorporating children’s rights into the private sector.

The assessment consisted of a worker survey via paper or tablets, interviews with factory management and Focus Group Discussions with both parents and young workers. 304 workers (75% were parents with children under the age of 15) from four factories in the garment manufacturing, printing, milk powder manufacturing, construction and machinery manufacturing industries participated in the worker survey. Of those, 131 workers (43%) were from the industrial zones near Hanoi in North Vietnam and 173 workers (57%) from the industrial zones near Ho Chi Minh in South Vietnam. Eight factory management staff were also interviewed and two focus group discussions were held for parents with children under the age of 15 and young workers under the age of 21.

Key Findings of the Rapid Assessment

Income: None of the four factories provided dormitories for workers, and the majority of workers lived in nearby social housing or rented houses. Only 36% of respondents said their income allowed them to save up, while the rest (64%) either spent all of their income on basic expenses or did not earn enough to cover all basic expenses. Furthermore, none of the four factories provided childcare facilities for parent workers.

Living Arrangements with Children: We also found that 84% of workers lived with their children. While this indicates that the left-behind children issue is not as striking in Vietnam as in China, it does suggest that there is still a high number (16%) of parents who are separated from their children due to work. Of those children left-behind, 94% lived with their grandparents.

Challenges as a Parent Worker: A striking find from the focus group discussions with parents was the fact that none of them thought of themselves as equipped with adequate knowledge to educate their children well and keep them healthy, despite the fact that 18/20 of the participants lived with their children. This perception of lacking parenting skills was also reflected in their choice of challenges: 47% of respondents chose “Looking after my children” as the second biggest challenge they will face next year.

Health Services: Another interesting finding was that 55% of female workers did not avail of the factory-provided health services before and after giving birth After discussing with local partners in the field of healthcare, the reason for this may be the fact that the quality of health services provided by the factories does not meet the standard of public healthcare. Rather than receiving good quality pre- and post-natal exams and consultations, the factory health services consist of a quick check-up and thus do not fulfil the female workers’ needs. For this reason, most pregnant workers pay for the pre- and post-natal care themselves.

Child labour: Child labour was not an issue in the four factories covered in this assessment. All four factories only recruited workers over the age of 18 and had robust hiring practices in place to prevent children from being recruited. However, due to the limitation of the sample size and relatively high management level of these factories, this finding should not be seen as a reflection of the overall situation in Vietnam. In fact, 12% of respondents reported seeing child labour in other factories and half of the respondents said they saw child labour in their daily life (mainly working in informal jobs like shoe shining, domestic work etc.).

Young workers: In both the survey and interviews with management, we found that young workers were unlikely to stay in the factory for a long time. What's more, their retention rate not significantly correlated with their wages, but with age. Workers’ relationship with management and co-workers, their general satisfaction rate of the working conditions, and factory’s support such as education and healthcare for workers seem to influence young workers’ decision on how long they plan to stay in the factory. The fact that none of the four factories hired under 18s bodes the question of whether this should be considered as discrimination against young workers and whether this policy is in the best interest of the child. Many young people are out of school from the age of 15 and looking for work, but with strict 18+ only policies in formal factories, many of these vulnerable youngsters may find themselves pushed into informal sectors, subcontracting factories and private factories that are worse in meeting compliance or health & safety norms. We believe that if they were recruited into a formal factory that provided them with certain protection and youth development opportunities, they would have much better career prospects over the long-term.