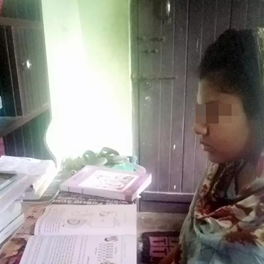 Devi’s* story is a familiar one in Bangladesh: she was born into an impoverished family and eventually dropped out from school when a close family member became ill and the family couldn’t afford the tuition. Girls in Bangladesh are disproportionally affected by interruptions to their education. Data from the 2017 Bangladesh Bureau of Educational Information and Statistics show that dropout rates for girls is 42 percent at the secondary school level, and this rate is more than double than among boys according to UNICEF.  Gender discrimination, poverty, child marriage and a host of other factors are the key drivers.

From the age of 12, Devi found work as an assistant sewing operator in a garment factory where she typically worked 11-hour shifts, six days a week. For the next 1.5 years, while her friends went to school, played and did homework, Devi spent her days doing repetitive work in a factory, often spending hours at a time standing. To earn more money, she would work overtime, sometimes as much as 50 extra hours per month.

Then in February 2020, her life would take an expected new course –  for the better. An auditor for the buyer spotted Devi working in the factory. Her young-looking face aroused suspicion and was flagged as a potential case of child labour.

How did she get hired as an underage worker?

During the ensuing rapid assessment, the factory  (a subcontractor for a tier-1 supplier) was co-operative and allowed The Centre to assess its documents and procedures. The Centre found that the factory had not checked the authenticity of her ID documents during the hiring process. Devi had used a doctored birth certificate that showed her birth year to be 2000 rather than 2006, making her 20 years old instead of 12. Upon inspecting the document, The Centre could easily see that the number ‘6’ in the birth year was altered to look like a ‘0’. Another giveaway was the serial number on the birth certificate: the last four numbers on Bangladeshi birth certificates are the birth year. This number showed the year 2006 and was a clear indication that her birth year was indeed 2006.

A quick and simple check uncovered her real age, but this was not a practice that the factory did. Documents were simply taken at face value and no questions were asked. During a subsequent training on responsible recruitment (see below for more details), it was clear that the factory management had a very low awareness of child labour prevention.

Devi was a clear case of child labour. She was under the legal minimum working age (which is 14 in Bangladesh) and therefore not allowed to work under any circumstances.

What happened to the girl after the auditor found her?

The Centre began a rapid assessment to gather all the facts and to discuss remediation options with the girl and her family. On the day of the assessment, the girl was asked to stop working and taken home.

In early 2020, just before the disruptions of the global pandemic, Devi was successfully re-enrolled in school where she resumed Grade 7. The Centre also arranged a private tutor for her and bought her the necessary educational supplies. She also underwent a health check and began receiving a monthly living stipend financed by the client to deter her from dropping out again. As the only child in the family, her parents were grateful that Devi could go back to school without placing the family under greater financial pressure.

Devi thrived in school, even when she had to switch to remote learning due to the nationwide lockdown. She went on to successfully complete both Grade 7 and 8, and has been accepted into a government school in 2021 to continue on to Grade 9. She has been showing a particular talent in mathematics and has begun taking a computer course. Her reintegration into the education system has given her new dreams and motivation: “The Centre has shown me the way how to dream and to make it come true,” she told The Centre. She is determined to continue studying as long as she can, and hopes to work in an office in the future.

What happened to the factory after the case came to light?

The training encouraged the participants to identify gaps in their current procedures that lead to child labour risks, and to take a proactive approach towards sub-contractor management and child labour prevention. Prior to the training, 37% of managers found it difficult to verify ages of job applicants. This dropped to 19% after the training, showing increased confidence among factory staff in verifying age documents. What’s more, during a pre-training survey only 43% of participants agreed that factories should take responsibility for child labour prevention among business partners, including sub-contractors and sub-suppliers. This increased to 71% after the training.

The final outcome of the training was the development of a practical action plan that the factory has committed to implementing. By demonstrating a willingness to address its gaps, the factory has not only maintained its business relationship with the client, it has also strengthened its systems and procedures to make it a more competitive factory in the future.

A happy ending for all

Thanks to the continued support from the brand and the factory to cover the costs of her remediation programme, Devi has managed to break from the typical mould that afflicts countless young girls in Bangladesh. The client-financed remediation programme has allowed her to take her life back. Her reintegration into the education system means that she will have more choices available to her and can look to the future with excitement. Meanwhile, the factory has been supported in understanding and addressing gaps in their management system while the tier 1 supplier has learned about the importance of strong sub-contractor and sub-supplier management.

Since 2018, The Centre has remediated more than 248 cases of child labour, and has experienced how a strong remediation process can create a much needed way out for children trapped in child labour, while also allowing factories to make systematic changes to their procedures to prevent child labour and strengthen their core business.