Child Labour Remediation: The Story of a Bangladeshi Boy Re-integrated into Education

Child Labour Remediation: The Story of a Bangladeshi Boy Re-integrated into Education

Abhaas* was initially not a fan of school, and this showed in his performance. After repeating Grade 2, he had had enough. He decided to leave the education system and work to support his family instead. To him, it made sense: the family was struggling financially and paying the school fees for him and his brother was a huge burden. From then on, a not-yet-teenage Abhaas began leading a work life that only adults should experience. He spent stints working in factories for extremely long hours with very little pay and no protection. When his family moved to Dhaka in the hope of availing of better opportunities, his family found him a full-time job in a printing factory. For one year, Abhaas worked at least 12 hours per day, sometimes even as long as 17 hours per day. He often worked night shifts and overtime and only had one day of rest per week. Sometimes after a day shift he wouldn’t get home until 01:00 a.m. only to start his next shift at 08:00 a.m. all over again. Abhaas was hoping that the experience would one day allow him to land a better job at a garment factory.

In February 2019, 13-year-old Abhaas, together with numerous other children, were spotted by an auditor who suspected them to be underage and engaging in child labour. As this was a factory supplying a client who has an MoU with The Centre to remediate child labour cases, The Centre’s local case officers were immediately notified and began a rapid assessment of the situation.

Typically, a rapid assessment involves visiting the factory, reviewing employment documents and conducting interviews with management. The aim of this process is to gain more information about the case and to identify gaps in the management system with a view to potentially addressing these gaps through training or other interventions. However, the printing factory would not co-operate and refused The Centre’s remediation team entry into the premises. Despite numerous attempts, no progress could be made, prompting the client to end its business relationship with the factory.

Despite the set-back, The Centre obtained the family’s contact details and conducted interviews directly with the boy and his parents. We found that the boy and the family were not aware of the labour law and regulations surrounding children’s involvement in work in Bangladesh. Moreover, they did not know about restricted working hours for children and that hazardous positions like many of the tasks in the printing factory, were off-limits to juvenile workers. It was evident that the factory was either unaware of or flouting all rules related to child labour and young worker protection. Abhaas was never given any training in health & safety and his young age was never considered when assigning him work.

What Abhaas was also unaware of was that his choice to forgo education in favour of a low-paying hazardous job would trap him into a perpetual cycle of poverty. Through our family interview, counseling, and sharing the benefits of education, Abhaas and his family came to realise the value of education and understood the negative impacts that the hazards at the printing factory can have on children. As part of the remediation plan, The Centre offered to research vocational school options and also support him to return to normal school if he so wished. To keep him in school, the remediation would cover all education expenses and provide him with a monthly living stipend until the age of 16.

What is the progress of the child labour remediation programme and result?

Despite having a two-year gap in his education Abhaas decided to resume his studies again from Grade 3. The boy was re-admitted to school with support from The Centre and despite having to switch to remote learning due to the pandemic, Abhaas came 4th in his class in his final exam in Grade 3. Upon considering his educational aspirations, keen interest in studying and performance, the school authority decided to promote him to Grade 5 instead of Grade 4 in 2021.

“This programme has given me a new life; I am working hard, and my parents are motivating me to achieve good results. I want to get a government job in the future” he said.

The father shared with us that “through your programme my son is getting an education and I am so happy about that. Please do pray for me so that I can raise him as a good human being”.

After completing Grade 5, Abhaas wants to take a basic computer training course, which will count as an extra qualification when he pursues his dream career in the future. 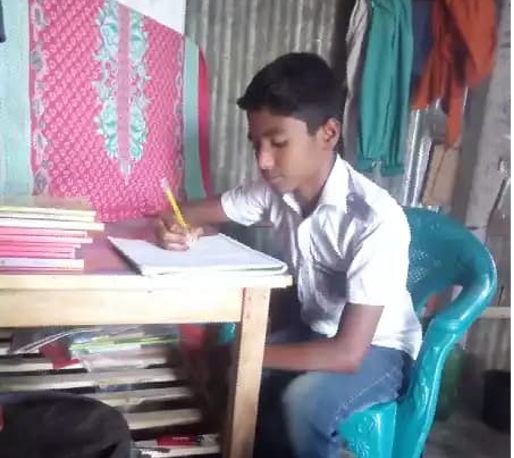 Photo: Abhaas doing his homework after being re-integrated into the education system.

Abhaas gave The Centre permission to publish his photo.

*A pseudonym is used in this article