C&C garment factory in Wuxi, Jiangsu Province, China is a key supplier for US apparel brand Colosseum. 80% of C&C employees are migrant workers, the majority of whom have left behind young children. Like many factories with a large migrant workforce, C&C has high turnover rates. C&C found that their migrant parent’s family situation was one of the key reasons workers were leaving. Research shows that when a migrant parent is worried about their child’s well-being, they perform poorly at work and are more likely to quit. At C&C:

“Last year was my first time leaving my children behind to work elsewhere. It’s been really hard for me and I thought about quitting the job several times," said a mother with three young left-behind children from Guizhou Province who works at C&C garment factory.

In large part, parental guilt stemmed from feeling emotionally disconnected from their children and disempowered to play an active role in their lives. At C&C, only:

C&C tackled their turnover challenge by getting to the root cause: Helping migrant parent workers stay connected to their children. C&C, in partnership with Colosseum and The Centre for Child Rights and Business (The Centre), launched a one-year training programme, focused on best practices in remote parenting and communication. One of the most well received offerings was the PhotoVoice parent tool.

PhotoVoice teaches parents to use photography as a tool for engaging and communicating with their children in a fun and creative way. Workers learn basic photography skills and are given a camera, which they use after-hours and on home leave to capture their lives as both workers and parents.

“Now every time when [my daughter] puts on new clothes, she will ask me to take a photo of her. When I took home the poster with her photos from the PhotoVoice project, she immediately ran out to her friends in the neighbourhood to show it off. I know she was proud of me!” Said a local father who lives with his daughter and works at C&C.

Upon return, workers showcased their photo memories at a final exhibition and awards ceremony. They expressed joy and pride in collaborating with their children on a meaningful, shared project at home. They also bonded with their peers at work sharing together the happy memories of their children and loved ones.

Impact on Parents and their Children

Not only did workers learn a new creative skill and feel more connected, they also changed their behaviour. Participants increased the actual amount of time they spoke to their children once back at work and made efforts to visit their children more regularly.

Parents also adjusted their parenting approach, choosing to take more quality time with their children while at home.

“This Chinese New Year we were dealing with family issues, so I didn’t pay as much attention. When my daughter saw the camera, she asked me to take a photo of her. At that moment I realized that I really should spend time with my children. So I took lots of photos of my son and my daughter, and took them to the county’s amusement park. Now when I see their happy faces in the photo album, I remember those happy moments,” said a working mother who has a six-year old son and an eight-year old daughter back in her hometown in Shandong Province.

They also felt more empowered to parent from a distance.

“The [programmes] made me feel confident that I can still educate my children well even when I am not around. Now I can enjoy [the] phone calls, [which] even last for one hour now!” a working mother with three young left-behind children from Guizhou Province commented.

And best of all, children felt the difference:

“Dad works for three days and then has one day off. That’s when he calls me. He usually asks about homework and whether I’m behaving, but now he also tells me about his work. Sometimes, the conversation lasts for a whole hour,” said a 12-year-old girl whose father works at C&C. She lives with her brothers and grandmother in a village in Guizhou Province.

Benefit to Brands and Factories

The saying goes “a picture is worth a thousand words”, and for factories, it was worth much more when it came to the bottom line.  After participating in the program, there was an increase in worker appreciation for management and more participants planned to stay two years or longer.

“This project was good for the unity and stability of this factory’s workforce. If you don’t make arrangements that consider the family situation of workers, then they’re not likely to stay on very long,” C&C’s General Manager said.

It also strengthened the working relationship between C&C and its brand client, Colosseum.

“The migrant parent worker training and photo-voice programme allowed us to support these parents and improve their relationship with their children back home. A secondary motivation has been to help factory management decrease turnover by improving worker satisfaction and loyalty. We’ve seen success in both areas,” said Kelsey Keene, CSR Director at Colosseum Athletics.

“They understand our difficulties as migrant parents with children left-behind and care about us.” Said a working father with three left-behind children in Guizhou Province.

Looking at the outcome of this project it becomes clear that C&C and Colosseum found a way to create strong and positive changes for workers – one memory at a time. 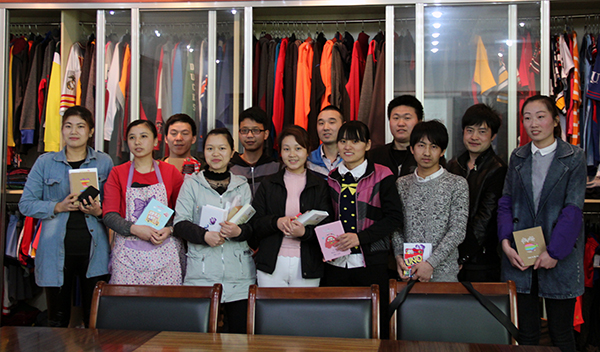