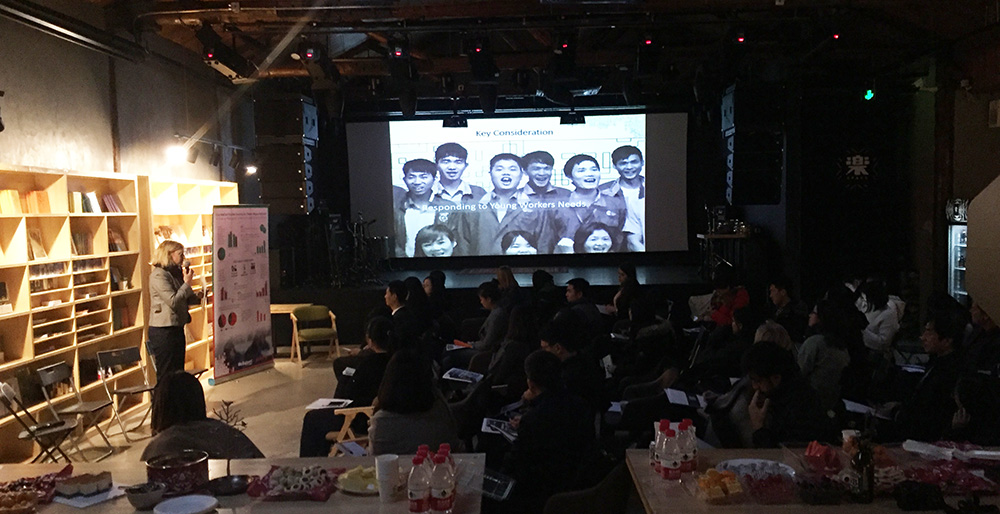 December 12, 2016, Beijing  – The Centre for Child Rights and Business (known as CCR CSR prior to 2021) launched a new study that assesses the multi-functional WeChat app from a new perspective: as a tool for supporting migrant workers in China's factories through learning, in particular migrant parent workers, young workers and line managers.

567 factory workers from across seven industries in China took part in an online survey, and a further 20 accepted in-depth interviews. The majority of those surveyed migrated from rural China to their current place of work. The study evaluates both WeChat in general as a tool for communication, learning and social integration; and The Centre's own WeChat-based eLearning platform "WeSupport" in terms of its benefits; users' characteristics, online habits and interests.

The study found that WeChat and WeSupport helps migrant workers with challenges such as social integration, knowledge acquisition, communication and motivation. For example, 64% of surveyed workers said WeChat helped them make new friends in their place of work. Meanwhile, content aimed towards migrant parent workers proved particularly beneficial, with 62% of surveyed parent workers saying that WeSupport helped improve communication with their children. What's more, line managers with no college education and males found the eLearning contents more useful than their college-educated and female counterparts even though lower educated and male workers followed the least number of public accounts. Interestingly, despite following the least public accounts, this demographic was actually the most active on WeSupport, indicating that once the barrier to accessing educational accounts is breached, WeChat-based eLearning can be particularly attractive to low-educated workers.

"Finding ways to break down the barriers to accessing eLearning accounts on WeChat, particularly among low-educated migrant parent workers & juvenile workers, is a priority for The Centre and should be an important factor to consider for everyone engaged in mobile-based eLearning development," says Ines Kaempfer, CEO at The Centre (formerly Executive Director at CCR CSR).

"Looking at the activity levels and engagement of low-educated, migrant factory workers on WeChat and the WeSupport platform, we can see that there is a great need for such platforms, especially in terms of providing knowledge, motivation and inspiration. This also reflects the challenges we see directly when conducting training programs in Chinese factories, where many parents are separated from their children throughout most of the year and where young workers and line managers often clash over misunderstandings caused by generational gaps, communication barriers and unrealistic expectations," Ms. Kaempfer added.

Through the in-depth interviews, the study also highlights how WeChat and WeSupport eLearning is applicable in the daily lives of migrant factory workers. For example, Yang Feng, a 27 year-old line manager, said the eLearning contents inspired him to be a better leader: "Now whenever I find any conflicts among workers, I try to be a mediator. I talk to all sides and encourage them to communicate with each other to deal with any misunderstandings…" he told The Centre.

The full report and infographics can be viewed and downloaded below.

The Centre (CCR CSR) Study on WeChat as a Learning Tool_EN.pdf