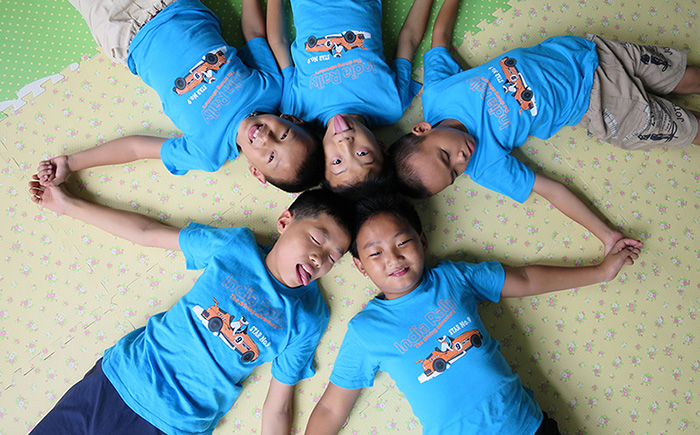 In the summer of 2016, The Centre (known as CCR CSR prior to 2021) implemented a Child Friendly Spaces pilot programme in five factories in China during the summer school break. The goal of this pilot programme was to provide the children of migrant workers with a safe, inclusive space to play, interact with others and to take part in joint parent-child activities. Further, the programme aimed to offer an opportunity for all to learn to strengthen relationships. The pilot programme was also expected to set a best practice in supply chain factories, with the anticipation that more factories will be encouraged to roll out CFS during summer months in the coming years.

To understand how and where CFS had the biggest impact, we carried out an impact assessment of four out of five of the factories. The assessment consisted of baseline surveys, final evaluation surveys and interviews with children, parents and factory staff.

We could see that CFS improved worker-management relationships, increased workers' satisfaction towards the factory and helped the children become more outgoing and social. What's more, we found that CFS helped address an important need of parent workers: to provide them with childcare support during the summer when their children are off school.

The full impact assessment can be viewed here and downloaded on this page.

What the Beneficiaries Say about CFS:

A CFS head teacher:
"Some children who were too shy to speak in the beginning, are now confident to greet even visitors from outside of the factories and are more sociable."

A factory manager:
"This is a very good project. We needed such projects for the satisfaction of our workers. We did this summer program this year and also hired professional teachers to help. The parents were very happy, especially when they saw the progress their children made during the summer. I believe that the impact is a long term one and a win-win to all parties involved.”

A parent worker:
"I was always worried about my kid’s safety during the summer vacation, as every year I heard about accidents involving children...CFS has four teachers to look after my five-year-old son. I feel much more at ease now and can focus on my work.”